WHAT MAKES A SANCTIONED ENCAMPMENT WORK (OR NOT WORK) FOR HOMELESS PEOPLE? 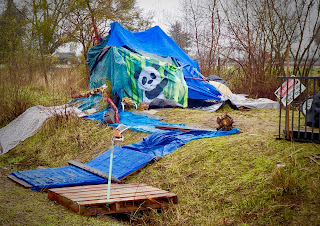 One of the most obvious non-solution solutions is the shelter system.
Shelters were created and were effective as an emergency option for people on the streets. They were never intended to be used as a long-term solution to give people shelter. Shelters were also absolutely never meant to become a permanent tier of housing because they are not housing. The shelter system is also not a viable or safe solution for many homeless people but that does not stop politicians from promoting them as if they are a real solution.
An innovative idea, that has been circulating for years but has recently seen a re-investment, is the idea of creating city-sanctioned encampment shelters. These initiatives create legal encampments in large abandoned areas – usually far away from city centers — that are run by the city or a non-profit and function like outdoor shelters. This is different from encampments that have gained legal exemption from cities but are run by and for their residents and don’t involve criminalizing, surveilance or policing people.
The formation of encampments does not represent an end to homelessness. Rather they are an indication of a critical need to create more effective local systems for responding to homelessness. Official strategies should focus on connecting people to permanent long-term housing solutions and not creating and operating city-run encampments. At the very least, official strategies should honor the creative ways that homeless people are housing themselves and their communities, such as building tiny homes and other structures, in response to the lack of housing.
People sleeping in encampments are diverse and interventions must address a range of needs, challenges, and goals. The forced dispersal of encampments is not an appropriate solution though city-sanctioned encampments have been used as a justification for increased police and sweeps of homeless camps by entrenching the idea of non-city sanctioned encampments as an illegal public safety/health concern. This forces the constant packing up and moving of elders, disabled, and physically injured individuals sleeping in encampments while ignoring reasons why people would choose a non-city sanctioned encampment over a city-sanctioned one. A person’s refusal to enter a city-sanctioned encampment can also be used to justify the criminalization and/or arrest of that person.
Homeless people who live in encampments use many strategies to keep themselves and their community safe. One of these strategies involves petitioning the city for code waivers, exemptions, or pushing for them to simply ignore that the encampments exist. These solutions are useful so long as they are not used by cities to pit homeless people against each other by naming some people’s encampments legal while others as illegal. They are also helpful as long as they do not increase the criminalization of these communities. Cities should not be congratulated for doing this most basic work of allowing people to sleep and rest without being criminalized but should be celebrated when they invest in long-term housing that meets the needs of homeless people in their neighborhoods.

Photo by Jonesy, Joe Rodota Trail Camp, Dec. 2019.
Photo description:  A single tent with a large cloth draped across one side with a picture of a panda on it.  A wooden pallet and another construction make bridges over a small ditch.
Posted by Adrienne Lauby at 12:50 AM