Posted by Gregory Fearon at 1:21 PM No comments:

Alice Linn and I went to Olive Park around 6 pm tonight.  It was light out and a comfortable temperature.Alice had cooked up two pans of pork, rice and peas which she offered people with applesauce on the side.  It was yummy.I bought a case of thick black trash bags to hand out.When we arrived there were 4-5 people hanging around near the picnic table.  We invited them over and spread out the food.  Over the course of about an hour we gave food to 15-20 people. Some were passing on the trail; others probably heard about the food or saw someone eating.Most of them didn't stick around to talk much.  Some people said they'd talked to the police who'd been telling them to move out of the park, not saying Monday but saying "the park is closed."  One person said there were many homeless people over by Food Max.Piece was there, the man who came to our meeting on Monday for the first time.  He took flyers and offered to spread them around.  There was one collection of belongings off the path down by the creek.  One of the people there said they were working on getting it organized so they could leave. Much of it was bundled and covered with plastic.One man said he had been trying to get into the Sam Jones shelter for weeks.  I said that he should return on Monday morning and he'd probably get right in.  It's ironic but this is someone who might be helped by what is going to happen.I've heard from some of you about what you've been finding when you talk to people in the sweep area.  I've heard that people are being cleared now; that no one is around in Olive Park; that people are further down the Joe Rodota Trail...Please let me/us know if you go out.   Let's share what we learn.   People will be scattered. People will be hurt.  We can prevent some of that and document offenses for the court if we spend some time now talking and getting some of the paperwork set up.Adrienne
Posted by Gregory Fearon at 10:23 PM No comments:

Hi Everyone,Let me know if you are going out to the sweeparea tomorrow.I walked for about three hours with Bryan tonight,talking to people as we went from Olive Park toa little past Dutton.  We started at 5 pm.There weren't any major groups of tents. Wetalked to about 20 people, some briefly, someextensively.  People have already scatteredand left.  The police have been very activealready.  But, there were many peoplearound in 1s and 2s.  We found two majorcamp sites and 4-5 small collections of property.I imagine there is more "stuff" hidden inbushes and kept far out of sight.  We gavesome people flyers and copies of theresource guide/As usual, people said kind, thoughtful andappreciative things.  Some were questioningor angry about the sweep.  One guy saidthat Homeless Action! didn't really fight forhomeless people.  Another one seemed interestedin coming to one of our meetings.Some of you know Bryan who joined me tonight.He brought his photos of homeless people's dogsto our meeting once.  Wonderful work!He's got an exhibit up at the Center for SpiritualHealing Mezzanine in Santa Rosa.2075 Occidental Rd.  They'll be up for a fewmonths and you can see them whenever theCenter is open.Let's gather on Monday morning between 6-7 amat the East end of Olive Park, at the picnic tablenear the bridge.  I'll bring protest signs and bagspeople can use to pack up their belongings.Adrienne795-2890 home land line
Posted by Gregory Fearon at 10:22 PM No comments:

Another Eviction of Unsheltered Residents of Santa Rosa 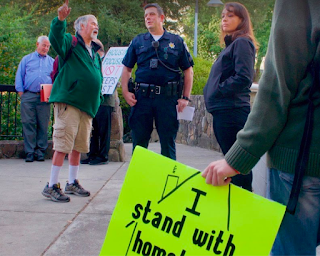 Late Sunday afternoon, I parked in the Catholic Charities parking lot, and walked up Morgan Street to W. Ninth Street.  In addition to a few people at the Drop-In Center, a couple who appeared to have been living in their car - were arguing about the need to leave the area that night.  He wanted to go to sleep, she wanted to go somewhere else and not chance the police sweep in the morning.  Half-hour later, on the way back down on the other side of the street, I saw they had left.  Almost everyone on Morgan had heard about the impending sweep. They asked if I knew when exactly it would happen, I told them tomorrow morning, but didn’t know how early.
I let sleepers alone, and there were four between Morgan and Depot Park.  Heading west across the Third Street Bridge, and then south to the creek, I found a few more hanging out next to the Prince Memorial Greenway.  They were young and wanted to know everything.  What’s this judge ruling?  What if I’ve been to Sam Jones, and can’t stay there?  How often can I get into my stuff if they take it?

I had another hour to search, so I said goodnight, and headed down the trail.  And just as the sun was setting, I found the last western SR couple down near the creek in a pretty complete tent site.  I made sure they knew about both the sweep, and Homeless Action!.  Before I left, we also told each other all we knew about the two red-shouldered hawks which were living above them.
Monday morning early , i repeated the walk.  The difference was the large gathering at the Drop-In Center picking up mail and waiting for interviews.  After checking in by phone with Adrienne, and learning there was a crowd at Olive Park, I retraced my route to make sure my friends were up and alerted.  Same locations, with a few more hanging out.  All were ready, but not sure where they’d go.  It seemed like the Police were moving east to west down the Greenway.  I asked Sgt Wolfe how far they were going.  He said probably not further than the railroad tracks before Pierson Street, and eventually i gave everyone west of where they stopped the word that they were safe today.  But I advised them to keep the litter and garbage off the trail, as it will identify their encampments.  And that will bring complaints from the cyclists, and eventually police.   I reminded them of the weekly meetings of HA! at FUMC on Montgomery Drive on Monday morning at 9:30am.
Posted by Gregory Fearon at 10:00 AM No comments: 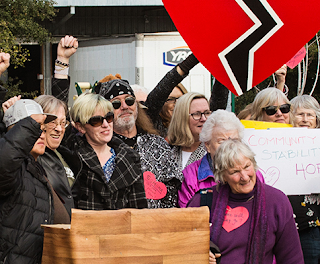 The photo to the left features Nicole Vanucci, the named plaintiff in Nicole Vanucci, et al vs County of Sonoma, et al.   Here's a link to the Youtube video of her speech.

Stipulation and Order for Preliminary Injunction

Our Webpage - HomelessAction.net
Posted by Gregory Fearon at 12:15 PM 2 comments: