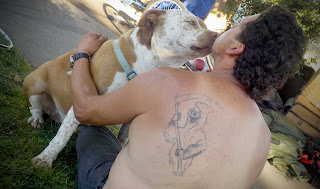 I met Devin* as we passed on the E Street sidewalk, April, 2015, and he asked if I had a couple of quarters. I said no, then turned around and asked if he’d had anything to eat today. He hadn’t.

We had lunch in a little Mexican restaurant on 4th and I learned that he loved his family, felt he had a good childhood, that he’d been in and out of psych wards, and that more than anything he wanted to work, earn a living, be able to pay rent and buy food. "A warm, dry space with a roof!” he exclaimed, eyes brimming with tears.

He didn’t feel he had anything to say about how he grew up, what school was like, except that after he graduated “I made mistakes and drifted. Didn’t spend my time right."

Devin graduated from Analy. I learned this from his mother after he’d given me her phone number so I could keep in touch with him.

He entered kindergarten on his fifth birthday, a year too early. Mother and school made a dreadful mistake, and later he wasn’t ready to go on to 1st grade. He never recovered from the humiliation and ignominy, particularly among former neighborhood playmates. His best friends were brutal. The school didn’t do anything to help his tormenters understand that failure to learn was not his fault.

When he was 13, ADHD riddled him, making school and home relationships full of pain for those around him. He was prescribed Ritalin. It calmed his body, but made life ethereal. Ritalin sometimes makes the patient’s mind almost unendurable day after day. Smoking pot will knock the buzz off the top of Ritalin.

He began smoking pot which gave some life back, but he went on to other drugs, finishing with Meth. He had given his psychiatric social worker permission to talk to me. She was interested in his history. When I told the PSW about his meth addiction, she said, "That's very interesting. Meth and Ritalin are chemically analogous, we consider Ritalin to be a precursor to Meth."

How many rattly kids given Ritalin are now Meth addicts? How much can we blame addicts for their condition? I’ve had Ritalin kids in my classes. What became of them?


The PSW knew none of his history because he would only say his childhood was wonderful, there were no problems, his family was loving. I learned from his mother, and reading between her lines, that after he began school, life for him was very difficult, often miserable.

Devin's a tidy, handsome man with luminous blue eyes who reads with intelligence, wants a regular life, a job, to go to college. His brain seems to be too scrambled to do more than apologize for his incompleteness and the trouble he's been to his family, worn out by 20 years of disruptive behavior they do not understand. They have no interest in letting him back into their lives, even though he sleeps in his parent's backyard most nights, hopeful for a shower, clean clothes and a hot bowl of cereal on the rare morning when he rings the doorbell.

His mom has no evident understanding about a child/man like Devin, and is of two minds about giving him clean clothes and hot cereal. She really doesn’t want to see him, wouldn’t tell his father she’d seen Devin, but still has a small, flickering, lingering Mother’s feeling for the man at the door.

She doesn’t let him in. When I tell her we know a great deal more about brain growth and chemistry and ADHD than when Devin was a child, and tell her what I know, it doesn't change how she views him or make her want to understand.

"He's 12.” (He was 32) "He acts like a child.” She makes no allowances for his anxiety, his desires to be self-sufficient, his brain burned by meth. "He makes lousy decisions." "He likes presents.”

She said her marriage is wrecked, there's more ADHD in the family and into the next generation. His mother is worn out, confused, not interested in understanding how he got there, nor in seeing that her grandson has better care and education than Devin had. His father, who owns a a small business and I'd suppose has reasonable intelligence and would want to know how his kid got that way, never wants to hear his son's name again.

The shoes he’d been wearing for weeks were a size too small, making him lame. I’d said I get him the right size. 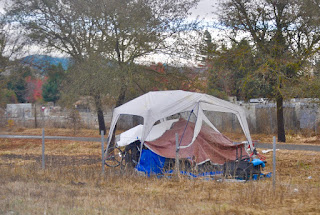 In late summer, we had a great Parkside country breakfast. He was calm, immensely grateful for our continuing friendship, and we talked about why he’d dropped out of sight for several weeks. He’d had some sort of episode and been sent to a hospital in Napa to get his "marbles lined up again". After breakfast I told him I had a pair of new hiking boots for him.

He was ecstatic, couldn’t wait to get to the car, to get the box in his hands. I had talked to the PSW at his former group home and knew they would take him back that day. We’d talked about it during breakfast and I kept returning to that as our destination. When he was living there, he liked it, but today he rattled off reasons it was an ill-begotten place to live. I had visited and knew it was clean, orderly, comfortable, quiet.

Once I opened the back door of my red Honda hatchback and handed him the box, that captured every ounce of attention he had. We drove a couple of blocks and he made it clear I was to drop him off immediately right there on Sonoma Avenue. The last I saw, he was running, box in hand, west to a bench where he could sit to change shoes.

I knew I had to turn my time and energy to convince our electeds they could house our homeless neighbors in dry, warm, lockable quarters at no cost to city or county.

UPDATE: Six years later.    I should have stuck with Devin. Except for three city council members, the electeds are immovable, requiring $1.2B stick-built housing for which there will never be money, showing no care for estimable homeless men, women and families rotting on doorways at night, on the creeks, in the brush, on the River. Residents they don’t know, and have no idea that’s essential when making policy.