Touched by an Angel, from Homeless Action! 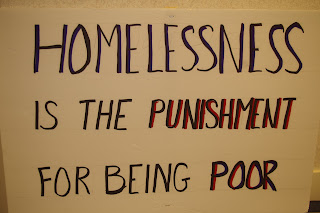 The clouds were gray and angry overhead, just waiting for the chance to turn the light mist into pouring rain.  He was driving home that Saturday, thinking about all the things that had gone wrong that day, that week, that year. Dear God, he prayed, let something go right in my life, just once. At least one thing had gone right. He had the $100.00 he had saved out of the budget for the week, and that was enough for the new game he wanted to buy.  Game Stop had opened a new store near Wal-Mart and he could swing by on the way home and pick it up.

He pulled into the parking lot and parked across from the store where he’d bought his cell phone. Opening the car door, he stepped out of the car as the mist turned into a light rain. It would probably open up soon, but he would be home by then warm and comfortable in front of his TV. With his game, and a nice cold beer.

He crossed the lot and stepped onto the sidewalk in front of the store. He barely glanced at the young girl standing under the eaves blocking his path. He was annoyed as he stepped off the sidewalk to get around her and her child. Didn't she know she was blocking the sidewalk with that stroller she was pushing?  She glanced briefly his direction then looked back down.

He reached the front of the store but the door was locked, and the store empty. The sign read "Grand Opening" in one week. Great, just great! Now he'd have to wait a whole week to get his game. His day was ruined. He turned to go back to his car, once again stepping off the sidewalk to get around the young girl. This time casting an annoyed glance in her direction. She met his look briefly then looked down once again.

He hadn't gone three steps when the impact of her face struck his heart. He couldn't remember ever seeing such a look of despair and hopelessness on the face of another person, let alone a girl so young. He turned back to look at her once again, only then realizing she was many months pregnant. How had he ever missed that? The stroller was full of clothes and other belongings, and a small boy clung closely to his mothers side.

He stepped back onto the sidewalk beside her and, in as gentle a voice as he could manage, said. "Miss, are you all right?" She looked up into his face, the despair and hopelessness momentarily gone and replaced by a look of hope. Then back again.  Looking down at her son, she straightened her shoulders and looked him squarely in the eye.

"No, I'm not," she replied quietly. "I have nowhere to go.  The hotel put us out this morning when I couldn't pay anymore. The rest of my things are in the room, and I have to pick them up this afternoon. I have a place at the shelter, but not until next week. I've been praying, but I just don't know what I'm going to do." Looking down at her son again, she continued. "I wouldn't ask for me, you understand, but Michael is cold and hungry. If we could buy some food, Wal-Mart will let us sit in the cafeteria. It's going to rain soon, and my son doesn't have a coat. I have enough to ride the bus and keep warm, but not for food too. Can you please help?" Her frightened voice struck him deep in his soul.

What's you name, he asked. My name is Gabriel she replied and placing her hand on the child's shoulder she continued, "This is Michael." The boy looked up and gave him a smile of pure innocence, untouched by the cold around him.  Reaching into his pocket, he pulled out the $100.00 he had saved for his game, and put it gently in her hand. "Take this money Gabriel", and buy something hot to eat for you and your son."  Then ride the bus back to the hotel to collect your things. I have friends at the shelter, and I'll make sure you get in. Don't worry.

The girl and her son smiled with joy as they looked at the money in her hand. She looked straight at him and said serenely "God bless you sir." It felt almost like a blessing. He felt a peace descend on him he hadn't felt in years. He felt better than he had in quite a while. He really had no problems, all things considered. Chuckling to himself, he imagined the look on her face when she returned to the hotel to find her bill paid for the week.  The people at COTS would take care of her and her son.

So she had been praying, had she? Well God sure answered her prayer in an unusual way. He was one funny looking angel.  Stopping for a moment, he thought maybe he ought to offer her a ride back to the hotel after all. Turning back her found her and her son still standing in the rain smiling at him.  As he watched, they suddenly changed shape before his eyes. Growing and beaming light in all directions. For a moment there stood two majestic figures of light untouched by the rain. One with a horn, the other with a sword.

As he watched, they turned their gazes skyward, singing praise, they opened their wings and vanished on a beam of light.  He stood stunned for a moment, the pouring rain now cascading off his hat and shoulders, not believing what he had seen.  Feeling better than he could remember. He realized that God had answered a prayer that day. His prayer. He had been sent a messenger to show him the true meaning of life.

He had been touched by an angel.

Friends. There are a lot of people in need of help these days. But you can't talk to a young mother, about the love of God, and expect her to hear you over the cries of her cold hungry children. Feed her children, and help her make them warm and safe, and she will listen to you all day long.
Posted by Gregory Fearon at 1:58 PM No comments: 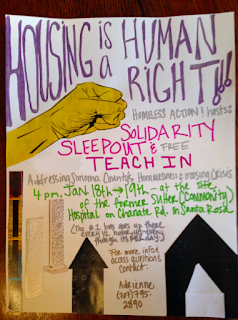 I very excited about next Monday and Tuesday's Homeless/Housing Teach-in and Solidarity Campout up on County Farm Road.  Homeless Action! members are working very hard to provide a productive and useful event which should result in dialogue and progress in the difficult work of advancing solutions to our community's homeless/affordable housing problems.  I strongly encourage all of my friends to join us, either on Monday night for our MLK Solidarity Sleep-out, or Tuesday's Daylong Teach-In.

Homeless Action! Presents ”Housing is a Human Right”
MLK Solidarity Sleep-Out & Teach In
FOR IMMEDIATE RELEASE
“Housing Is A Human Right: An MLK Solidarity Sleep-Out and Teach-In,” will be held indoors in the Rotunda building off Chanate Road in Santa Rosa, on Monday, January 18th starting at 4 p.m. and on Tuesday, January 19th from 10 a.m. – 4 p.m.  The sleep in will provide a taste of what it means to be homeless while the Teach In will address Sonoma County’s homeless emergency and the housing crisis.

With over 3,000 homeless people in Sonoma County, with Santa Rosa showing the strongest year-to-year growth in rents in California and with current plans to demolish large and habitable county buildings, it is time for the community to consult with each other and find solutions.

The Teach-In will address the homeless emergency, the housing crisis, and the future of the county-owned buildings and land along Chanate Rd.  Speakers include low income housing expert John Lowery, River King, a currently homeless mom working on building a tiny house community in Santa Rosa, Caitlin Childs, from Social Advocates for Youth (SAY) and many, many more.

The event begins on Monday, January 18th (MLK Day), with a table at the Community Baptist Church, Martin Luther King “Day On NOT a Day Off” event from 10 a.m. to 1 p.m..  The church is located at 1620 Sonoma Ave, Santa Rosa.
The Teach-In will provide an opportunity to learn about current programs, services and ideas for solutions.  In half-hour sessions in three locations, speakers from the homeless and faith communities, service providers and caring individuals will join participants to talk about homeless children, teens, families, veterans, tenants and seniors.  Topics include the decriminalization of homelessness, the homeless bill of rights, rent stabilization, eviction regulations, tools for preserving and expanding low income housing, and the future of the county property along Chanate Road.

“Martin Luther King Jr. didn’t just work one day of the year; he worked every day.  We’re happy to extend his holiday to explore what Sonoma County is doing, and can do, to solve its problem of providing housing to all its residents,”  Jackie Brittain, a founding member of Homeless Action! said.

“I support this effort because homelessness is not a crime, it’s a condition,” Mike Mugridge, a broker for Burbank Rentals explained.  “It’s a condition that we have allowed to perpetuate.  And, we’ve allowed our politicians to ignore it because they don’t think we care.”

According to Sheila Baker, a formerly homeless person and organizer of the event, “This will be a great opportunity for everyone to spend the day in some quality time together, in a place where many in our county were born and were cared for, to talk and share and plan for our future.”
###

Posted by Gregory Fearon at 4:33 PM No comments: