Sunday Memorial For Tut in Guerneville 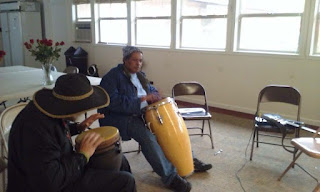 I'm sad to report that we lost one of our best homeless citizens - Tut.  He was homeless due to a fire that took his house/biz/vehicle ... He had some medical issues ... Spending the one night (a week ago Thursday) outside in the elements impacted his already compromised health ...

He went to the hospital Friday, April 1 where he died.  He is missed.

This Sunday at noon Tut's life will be memorialized at the Regional Park in Guerneville ... It's the park on the other side of  the Walking Bridge - across River from Johnson's Beach.

Please feel free to pass the word along to anyone  you believe may be interested.

Posted by Adrienne Lauby at 11:53 PM No comments:

* Camp Michela has to move by May 1 and has
nowhere to go.  County property? Private Property?
Anybody?

*Over 100 more people, including the 19 currently living
at Camp Michela, will have no safe, warm place to
sleep on May 1 after the closure of the winter shelter
emergency spaces.

*On April 1, a crew of community and homeless people
advocated to keep the Guerneville winter shelter open
an additional 30 days. "People have this belief that
homeless people will ruin their neighborhoods or communities,
but when we work together for the benefit of the community
it's a solution. Not just a band aid."  (see Wendy Bignall's
e-mail at the bottom of this message for more).

*The City of Santa Rosa has gathered a list of 30 current
encampments.  They have fostered relationships with
homeless people in the camps and sometimes provide trash
pick up and other resources.  They are being very rational
in looking at each encampment individually, realizing that
each of them provide something valuable to the most
vulnerable.

*The Committee on Homeless of the S.R. City Council
meets the third Monday of the month, April 18 at 9 am.
Check at the mayor's office for location.  Santa Rosa's
CHAPP Program allows private individuals and groups
to host indoor, car and/or tent shelter for the homeless on
their property.  Last week, it was extended until May 1.  Now,
it needs to be made year round.

*The County General Services Department has again
refused to allow Homeless Action! to tour and/or do an
independent review of the potential for reuse of the former
hospital buildings on Chanate.

*There are currently 200,000 square feet of vacant buildings at
that site and any construction is years away.  That's a thousand
square feet for each one of the 2,000 homeless in Sonoma
County!  Yet, people sleep in the bushes every night.  Tell the
supervisors to allow temporary shelter at the Chanate property!

We'll take up these problems and move our current efforts forward
at our meeting next Monday.

------------------------------
SANTA ROSA RENT CONTROL
Tenants won a victory when the Rent Stabilization/ Just Cause
Eviction Sub-Committee of the Santa Rosa City Council approved,
2-1, that a real rent stabilization and just cause policy go to the
rest of the Council.  (Julie Combs and Chris Coursey
in favor. Tom Schwedhelm against).  Next: the Council discussion
and vote to move it forward again. Probably May 10, probably
after 4 pm.

Although this ordinance is moving agonizingly slowly, it has great
promise to allow thousands of local renters to continue to live in
Sonoma County.  It will also be a milestone for tenants statewide as rent
control becomes a mainstream issue for the first time in decades.
The North Bay Organizing Committee is spearheading the work
on it. Davin Cárdenas, davin_cardenas@yahoo.com

-------------------------------
SONOMA COUNTY PEACE AND JUSTICE CENTER HONORS
CAMP MICHELA
Sat. April 23, 5-10 pm at the Sebastopol Community Center,
the annual awards banquet will include the members of Camp
Michela who will receive the Community Organization Award.
Congratulations to the hard-working Camp Council, the community
advocates and (especially) the residents who had the courage
to come in out of the shadows, take a public stand and build
a community with each other.

__________________
SIDEWALK STORAGE IN L.A.
I'm looking for some help with this news article.  It says,
"Homeless individuals would be allowed to store a 60-gallon
bin’s worth of belongings — including deconstructed tents,
bedding, clothes, food, medicine, documents and other
personal items — on the sidewalk as long as they are
attended."  People were not allowed any sidewalk storage in
the past.  (You may remember that Berkeley recently said the
homeless couldn't have any belongings beyond a 2-foot
square.)  But advocates opposed the change and there's more
going on here than I could figure out.  Help me, someone...
http://bit.ly/1TB3t55

---------------------------
HOMELESS COURT
This project allows homeless people to wipe infractions and fines
off their records so they can get on with their lives.  Most will have
to do some community service.  The homeless court convenes
once every three months and you have to get referred by a social
service agency.  The first session is full, but there's another this
summer.  The grant money to keep this going covers two years.
Contact Georgia Berland for more details: GBerland@aol.com

----------------------------
MORE TREATMENT: LESS JAIL
This program for people whose lives are miserable because of drug
and alcohol use also got a two year grant.  The official name is the
"Serial Inebriate Program."  However, the money for the actual treatment
fell through causing another delay.  It's not an inconsequential amount
since people often need 6 months in-patient care and may need to
repeat the treatment more than once.

There is large savings in emergency room costs from this program, so
here's to the local hospitals paying for the treatment.  Why is drug and
alcohol treatment any different than stroke rehabilitation or cancer
treatments?  A healthy community is a good community for all.

----------------------------
GUERNEVILLE SHELTER EXTENSION
...this effort was a community based outcry ... we have spent the past several months requiring private property owners to come into compliance with trespass and waste management rules and regulations; as well we have spent a lot of time working with law enforcement to enforce the public safety and nuisance rules/laws - the homeless contingent has been working with us on trash pick up as well.  It really has been a true community effort.  Having the homeless put out on the streets with no viable alternative living situation was a loss for our entire community.

I want to be clear so that credit goes where it belongs.  It was a win on many levels, not only for the homeless - I believe this can be publicized just for that purpose ... people have this belief that homeless people will ruin their neighborhoods or communities, but when we work together for the benefit of the community it's a solution.  Not just a band aid.

Stay tuned - we only got a brief stay (a month) - there is still an ongoing effort to identify and create a Managed Homeless Village (yes, that it my new term ...!!) ... all direction and guidance received was enormous and it could have gone very differently without the support - so thank you to all that gave their time and guidance ... best regards - wendy  [Bignall]

From the Top of the Hill

As you may or may not know, the City of Santa Rosa has embarked on a project of transforming, changing and upgrading the City's Bus System. It is the "Re-imaging City Bus" project. One of those bus routes proposed,  will come up Chanate Road make a left on Parker Hill Rd. turn right on Sleepy Hollow, make another right on Bonita Vista, travel along the back of Hidden Valley Elementary School and finally make another right on Chanate Rd and continue down the hill to town.

The reasoning behind this route is to service the "Health and Wellness Center", which is located in the same area as the Bird Rescue. All the other County facilities have relocated in preparation of the Re-purposing of Chanate Hospital.  The "Health and Welfare Center will be relocating in 18 months.  But you will still have a bus route. Granted it will only travel once an hour,  but those of us who have, or have had children attend Hidden Valley Elementary school know how congested the back of Hidden Valley  can be both  in the mornings and at the end of the school day.  Let us not forget, both the School and the Park are used for multiple sports activities throughout the year.  Parking on Bonita Vista is somewhat dangerous now, especially around the turn in front of the park.

I am sure the County Supervisors are happy because they will have a bus route in place to service the Re-purposing Chanate project,(which will have 20% Affordable Housing) or is it Low Income housing. Will this housing be affordable to buy or to rent ? Will the land be sold or will the housing be attached to a 100 yr. lease ? Will the buildings be apartments? How many units ? Traffic is terrible on Chanate now and Hidden Valley Elementary schools are both impacted.   So far,  what we  have heard from the supervisors is that they would like some sort of a "Homeless Youth Facility ", commercial property, a park, trails, and affordable housing.( Multi-Use) and current market priced housing.  Would you buy a $800,000 home next to a apartment building?

The purpose of this email is to keep you informed of the developments taking place in our neighborhood. the Transit Department will take this "Re-imagining City Bus" project to the city council within the next few weeks.  For the most part, the changes made to the bus system are definitely an improvement, except this particular route which make sense at all, except maybe to fulfill the needs of the County in Re-purposing Chanate .

The way I see it, we have two choices at this point:

The first being; do nothing and let our elected officials do whatever they want, In which case we will be sorry 10 years down the road.

The latter;  be proactive regarding these two projects and email the Santa Rosa City Council and express your feelings about this bus route. (They do read their emails)  An alternative would be to have the route  turn around in the Chanate Hospital area and not down Sleepy Hollow.
An alternative as far as the "Affordable Housing part" of the Chanate project would be to locate it off West College Ave, just west of Stony Point Rd.  ( the old Water District Building, property owned by the County). It is on an established  bus route close to the Westside Transit Center , and The  Finley Recreation Center. For this issue an email to our County Supervisors would be prudent.

In conclusion, in all fairness, we really don't know at this point what is going to happen with the Chanate project. We do know that only a portion of the land is build able. I think we can all agree that further urbanizing this area is not in the best interests of it's residents.

Thank you for your consideration

Posted by Gregory Fearon at 9:51 PM No comments: